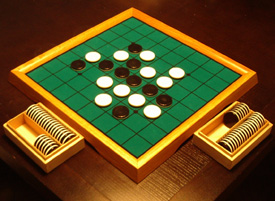 The Game of Othello

“A minute to learn… a lifetime to master!”. Despite having very simple rules the game of Othello is rich in strategy and deserves its place among the “classics” such as chess or checkers. The game is played on a board of 64 squares (like a chessboard but all squares are the same colour) and 64 discs which are black on one side and white on the other. A move consists of placing a disc in such a way that it “captures” the other player’s discs by flipping them over to one’s own colour. The player with the most discs of his own colour facing up at the end of the game is declared the winner.

The exact origins of the game are still unknown but a popular game known as “Reversi”, very similar to Othello, was played in 19th century England (for copyright reasons Othello is often still referred as Reversi on the internet). Then in 1971, Goro Hasegawa of Japan “re-invented” the game making some slight adjustments to the rules and marketed the game under the name “Othello”. Othello was an instant success, first in Japan, and soon all around the world. Since 1977 a World Othello Championship has been organised every year.