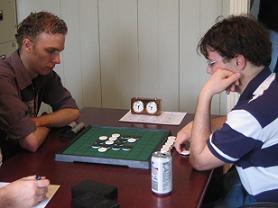 Congratulations to Matt Vinar, who retains his crown as Australian National Champion, undefeated in this tournament.

It was fairly close in the middle. In the last round, any of Phil, Fab, Scott or Luke could have made the final.

We didn’t know that Fab was coming from WA! As the highest scoring rookie (first Nationals tournament players included Fab, Brad and Hong Kong), Fab was presented with an Othello board. So apart from all the joys of competing on a national level, he has something tangible to take back across the country.

Transcripts will be decoded, formatted and put on the forum some time later this week.