Just like last year in Iceland, Japan won all 3 major titles at this year’s World Othello Championship in Mito. Hideshi Tamenori won his 7th world title, 20 years after his first title which was also in Japan, Toshimi Tsuji is the new women’s world champion, and team Japan (Tamenori, Nakajima, Imaoka) won the team title yet again.

As for team Australia (Vinar, Fu, Ortiz), while we didn’t win any silverware, we set a new Aussie record of 16.5 points finishing 17th from 28 nations.

You can find all the standings including game transcripts of each round here. 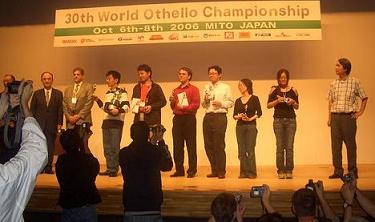