It was exactly 10 years ago on September 16th 1995 that the Australian Othello Federation was born at the University of Monash in Melbourne. The AOF was formed just a couple months before the 19th World Othello Championships which were held in Australia, also in Melbourne. Maybe you can recognise some of the players from that 1995 WOC on the photo below (almost all of them are still involved in the game today). 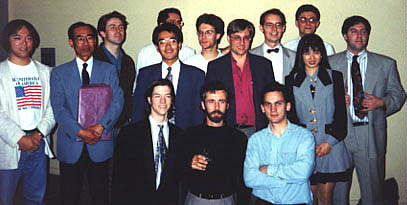