Robert Girardo of Melbourne won the gold medal at the Othello “Victorian Open” during the Mind Sports Australia game festival held at Mount Eliza, Victoria. The tournament attracted a total of 8 players and was directed by former Australian champion Matt Vinar. Gold, silver and bronze medals were awarded to the top 3 players. 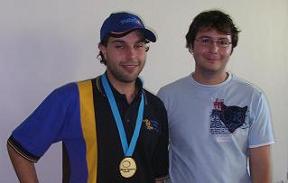