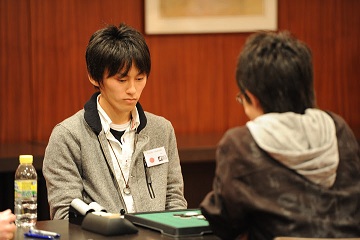 The 36th World Othello Championship was held in Leeuwarden, the Netherlands, from November 7th to November 10th.

Yusuke Takanashi of Japan is the 2012 Othello world champion after defeating Kazuki Okamoto by 2 games to 1 in the first all-Japanese WOC final.
The Japanese team (Takanashi, Okamoto, Kurita) also won the team championship with a total of 33 points, a new WOC record.

Veronica Stenberg of Sweden made sure Japan didn’t take home all the titles however as she won the Women’s WOC final against Mami Yamanaka.

Unfortunately Australia was not represented this year.

All the results and games of the 36th World Othello Championships can be found at www.woc2012.nl

More stories and photos of the event are on Othello News